1. What problems can a developer have when designing a database?

In addition, the developer additionally meets with other difficulties, which include:

In the process of developing database management software, the developer must learn the requirements of the customer in detail. The database should be designed in such a way that it is understandable, most accurately reflects the problem being solved and does not contain redundancy in the data.

To facilitate the process of developing (designing) a database, the so-called semantic data models are used. For different types of databases, the ER-model is the most well-known data model (Entity-Relationship model).

2. What is the ER-model (Entity-relationship model)? What is the need to develop an ER-model?

For large databases, the development of an ER model makes it possible to avoid design errors that are extremely difficult to correct, especially if the database is already in use or at the testing stage. Errors in the database structure can lead to alteration of the code of the software managing this database. As a result, time, funds and human resources will be used inefficiently.

ER-model – a representation of the database in the form of intuitive graphical charts. The ER model visualizes a process that defines a certain subject area. An “entity” – “relationship” diagram is a diagram that graphically represents entities, attributes, and relationships.

The ER model is only a conceptual level of modeling. ER-model does not contain implementation details. For the same ER-model, details of its implementation may differ.

3. What is an entity in the database? Examples

An entity in a database is any object in a database that can be distinguished based on the essence of the subject area for which this database is being developed. The database developer must be able to correctly identify entities.

Example 1. The following entities can be distinguished in the bookstore database:

Example 2. The following entities can be distinguished in the educational process accounting database of a certain educational institution:

4. What are the different kinds of entity types? Identifying Entity Types in the ER Model

In the model “entity” – “relationship” there are two kinds of entity types:

Each entity type has a specific set of attributes. Attributes are intended to describe a particular entity.

There are the following types of attributes:

In the ER diagram, attributes are denoted as shown in Figure 2. As can be seen from the figure, any attribute is denoted as an ellipse with the name inside the ellipse. If the attribute is a primary key, then its name is underlined. 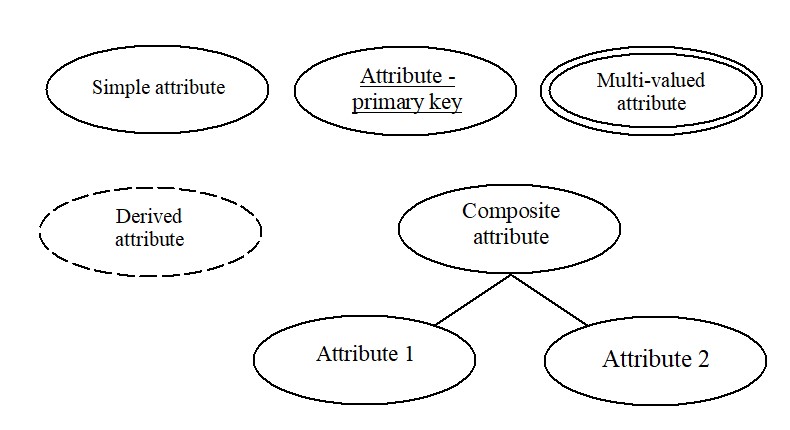 6. How are the entity types and attributes of the ER model implemented in real databases and the programs they manage?

When developing database management programs, entity types and their attributes can be represented in different ways while adhering to several approaches:

If the database is implemented in known relational DBMS (for example, Microsoft Access, Microsoft SQL Server, etc.), then the types of the entities are represented by tables. Attributes from the ER model correspond to the fields in the table. One record in the database table represents one instance of the entity.

Each attribute type is implemented as follows:

If the database is implemented in a unique format, then the types of entities must be represented as classes or structures. Entity attributes are implemented as fields (internal data) of a class. Class methods implement the necessary processing of class fields (attributes). The interaction between classes is implemented using specially designed interfaces using well-known design patterns.

7. An example of a fragment of the ER-model for the type of entity “Student”

This example demonstrates a fragment of the ER-model for the type of entity “Student”. 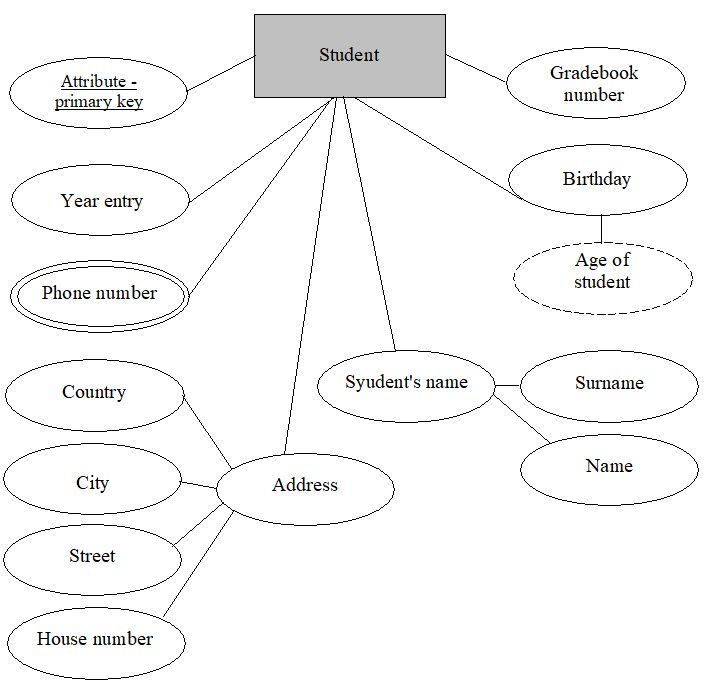 Figure 3. Fragment of the ER-model for the type of entity “Student”