1. General form of representing an escape-sequence. The \ (backslash) character.

To represent special characters, use the \ character. The general form of the escape-sequence is as follows:

here characters – some characters or numbers that replace one character. This character has a binary value defined by an escape-sequence.

After executing the above code, the following result will be obtained

The table shows the escape-sequences of the Python language. 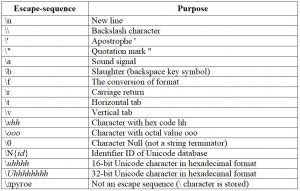 4. Determining the length of a string containing an escaped sequence

In a program, an escape-sequence may consist of several characters. When displayed, these few characters are replaced with one corresponding character.

In the above code, the line

in the program has a length of 7 characters. The actual string length is 3 characters. This is because the string contains two escaped sequences that are replaced by single characters:

5. Representation of characters in hexadecimal and octal systems. Example

Using escaped sequences, you can represent characters in hexadecimal and octal systems.

6. The representation of the backslash character \. Example

The backslash character \ is stored in the string as it is if there is no valid service character after the \ character that is displayed in the table in section 3.

When using escaped sequences, it is possible that using the \ (backslash) character in combination with other characters generates invisible errors.

For example, if in some variable s you need to write the full name of the file, which is placed along the following path

then a string in Python

will contain an invisible error: the variable s is equal to the value

This is due to the fact that the sequence of characters \t is considered as one tab character (see the table with p. 3).

In order to avoid such negative cases, you need to disable (suppress) the mechanism of escape-sequences. The following general form is used to disable escape sequences in strings.

that is, before the string you need to put the character r or R.

As you can see from the example, an erroneous full file name is generated in line s, and the correct file name is formed in line s2 thanks to the R symbol in front of it.

Using the triple quotation mark “” “…” “” you can form multi-line blocks of text.

Result of the program