Strings. Access by indexes. Slices. Get a fragment of a string. Examples

1. Ways to get string fragments

In Python, string fragments can be obtained in one of three ways:

2. Indexing operation. Getting a character from the beginning and end of a string

here index is the position of the character to be read from the string.

Figure 1 shows an example of index numbering for some string S.

In the example shown in the figure, the symbol b can be accessed in one of two ways:

3. What is a slice? Types of slices when working with strings

A slice is a form of parsing that allows you to pull out fragments of strings (substrings) in one action. Using slices allows you to get substrings in a convenient way. There are two types of row slice assignment operations:

4. Operation substring extraction with two boundaries [:].Ways to get a substring. Examples

When working with strings, the following slicing assignment forms can be distinguished, in which two boundaries are specified:

In this case, the substring is pulled from index i to index j-1 inclusive from string S. Figure 2 shows an example of pulling substrings. 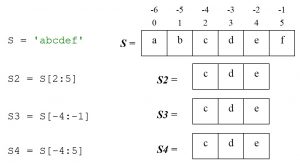 In this form, the first index is not indicated. This means that the substring is pulled from the beginning of the string (positive offset 0) to index j-1. Figure 3 shows an example of this slice.

With this form, the second index is missing. This form pull out the elements of the string from position i to the end of the string. Figure 4 shows an example of this slice.

Figure 4. Pulling substrings from a string

This form pulls the items of the string from the beginning of the string to the end of the string. In this way, you can get a shallow copy of a string that contains the same value but is located in a different area of memory.

5. Extended operation of pulling substring [::]. Ways to get a substring. Examples

The extended operation of pulling the substring [i:j:k] (slice) has three boundaries. The third boundary k defines the step by index. The value of step k is added to the position of each item that is pulled from the string. The value of k is optional. The default value is k=1.

Regarding the value of k, the following features can be distinguished:

The following extended forms of pulling a substring are distinguished:

With this form, all elements of the string are pulled starting from position i, ending with position j-1 inclusively with an offset (step) k. If k<0, then the order of the boundaries i, j is reversed.

This form does not contain the extreme boundaries of the string i, j. This means that the values i, j by default indicate the extreme characters of the processed string.

With this form, the original string is copied to another string completely without change.

Python has a separate slice() operation that allows you to get a slice object. The general form of the operation is as follows: