An example of creating a modeless form in a Windows Forms application. Modal and modeless windows

Any more or less serious program uses dialog boxes to organize the user interface. In the graphical interface of the Windows operating system, there are two types of dialog windows (dialog boxes):

Modal windows are the most common type of window. If a modal window is opened, then to get to the main program, it definitely needs to close. Without closing the modal window, it is impossible to switch to the program that called it. In Windows Forms programs, it is possible that one modal window opens another (next) modal window. Thus, a chain of calls is obtained.

As a rule, a modal window contains buttons of the type OK, Cancel (or others), when clicked, this window closes.

An example of a modal window is the Open… command of the Microsoft Word editor, which opens a file selection window. Until a file is selected or one of the cancel buttons is pressed, it will not be possible to go to the editor.

2. Features of working with modeless windows in Windows Forms

When working with modeless windows, the following features were noticed:

3. Information exchange methods between the main form and the modeless form

When using modeless forms, it is important to exchange information between the main program (main form) and the modeless form.

To pass data (information) from a modeless form to the main form, you can use one of the following methods:

4. An example of developing a demo program using a modeless form

After creating a project using the Windows Forms template, the main form is automatically created, an instance of which is called Form1.

Create a main form and place the following controls on it:

Set the properties of the form and controls as shown in Figure 1:

You also need to correct the dimensions of the main form.

After setting, the main form will look like as shown in Figure 1. 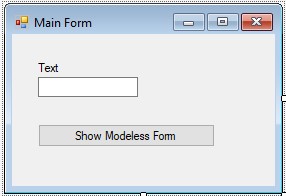 In the window that opens, you need to specify the template “Form (Windows Forms)”. The default file name is Form2.cs. As a result, an instance of the form named Form2 will be created.

Place the following controls on Form2:

After setting up, the modeless form will look as shown in Figure 2. 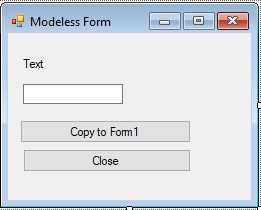 4.5. Entering a static reference to Form1

In the text of the class Form1, you need to enter a static variable named form1:

A static variable is of type Control. All controls are inherited from the Control class. The same applies to the form.

4.6. Programming the Click event handler of the button1 control of form Form1

To complete this step, you first need to activate Form1. Then you need to program the Click event of the button1 control placed on Form1.

The text of the event handler is as follows:

4.7. Programming the event handler of the Click button button1 of the form Form2

First you need to activate the form Form2 and create a handler for the Click event of the button1 control.

The text of the event handler is as follows:

In the event handler based on the static reference form1, a control element of the TextBox type with the name textBox1 is called cyclically (just in case there are several textBox-es in the main form).

4.8. Programming the Click event handler for the button2 control

When you click button2, you need to close the modeless form. The text of the corresponding handler is as follows:

As you can see from the above code, a modeless form closes just like a modal one.

After completing the instructions, you can run the program. During program execution, using the “Show Modeless Form” button, you can invoke several modeless forms from the main form (Figure 3). In this case, from secondary modeless forms, information can be transferred to the main program one by one. 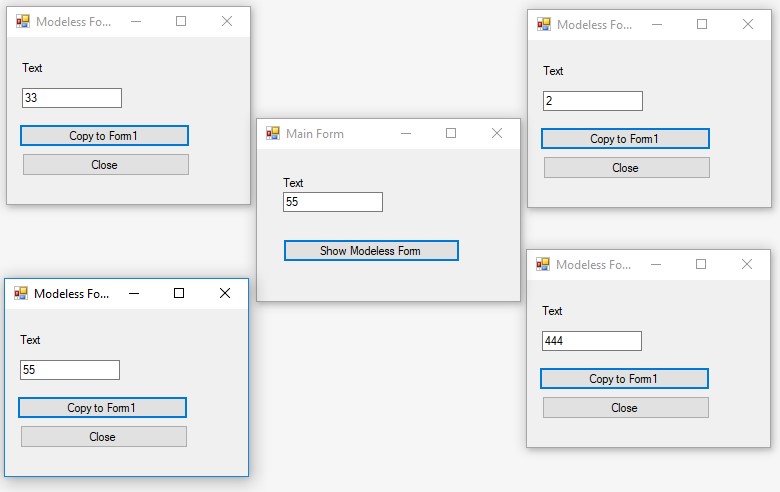 Figure 3. The case when 4 modeless forms are called from the main form