Before exploring this topic, it is recommended that you familiarize yourself with the following topic:

1. What special class functions are provided by the compiler by default? Example

When the class is initially declared, the compiler provides 6 special functions by default that can be overridden:

Any of the above functions can be overridden in a class with your own implementation.

Example. Let an empty class (stub) named MyClass be given

For the class MyClass, the compiler generates 6 special functions by default. The signature of these functions is as follows:

2. Move constructor and move operator. The purpose. Features of use. General form

The move constructor and the move operator were added in C++ 11. The main idea behind using these two constructs is to speed up program execution by avoiding copying data during initial initialization and assignment of so-called rvalue references.

Also, if it becomes necessary to use these structures, it is recommended to add them in pairs (both structures).

The general form of declaring a move constructor in a class

The above general form uses the noexcept keyword. This specifier indicates that our function (the move constructor) does not throw (throw) an exception or crash. The compiler recommends using the word noexcept for the move constructor and the move operator. In the move constructor, no memory operations are performed (memory allocation, memory release, writing data to the allocated memory area, etc.), but a simple assignment of the pointer (s) takes place.

3. Figure showing the purpose of a move constructor in a class

Figure 1 shows the case when the class does not implement the move constructor and the copy constructor is called instead. Copying a large data array A with dimension n elements for a class named MyClass is considered. As you can see from the figure, the entire array is copied element by element. If the number of elements in this array is large, this process will take some time.

After adding the move constructor to the MyClass class, the data is no longer copied (Figure 2). This gives a significant gain in the speed of program execution if the number of elements in the obj.A array is significant (for example, n = 1E6). 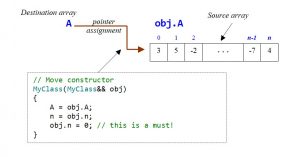 Figure 2. Move constructor. Assigning (redirecting) a pointer to the source array. Data is not copied

This topic covers only the general features of rvalue- and lvalue- references. A detailed overview of lvalues and rvalues is a completely different topic that requires a separate thorough study.

If a move constructor is declared in a class, then it is called in cases when the expression that initializes the value of an instance of this class with the = operator receives another instance, which is a so-called rvalue reference.

Below we consider one of the possible situations of calling the move constructor.

In the most general case, any function that returns an instance of the ClassName class looks like this:

The move constructor is called when the SomeFunc() function is called at the time the class instance is declared.

The obj instance is located on the left side of the assignment operator and is an lvalue reference. Such a reference is scoped within curly braces { } and is available after the current expression completes. In other words, you can use the obj instance in the future, for example

here SomeInternalMethod() is some public method from the ClassName class.

In turn, the SumeFunc() function is placed on the right side of the = operator. The result returned by the function is an instance of the ClassName class. In this case, this instance is a temporary rvalue reference. The scope of this temporary object is determined by the current expression. This temporary instance will not be used after the assignment (Figure 3).

Figure 3. The case where the move constructor is called. Scopes for lvalue and rvalue references

If a class implements its own move constructor, such initializations will call that constructor instead of the copy constructor.

The following actions are performed in the move constructor:

The purpose of using the move operator is the same as that of the move constructor – to speed up program execution by avoiding direct copying of data when assigning so-called rvalue references, which are used in expressions on the right side of the assignment operator.

If a move operator is declared in a class, then it is called in cases when an instance of a class is obtained in the assignment operator (=), which is the result of a return from another function.

here SomeFunc() is some function that returns the instance of the class ClassName.

If the class does not implement the move operator, then this operator is replaced by the copy operator.

The general form of declaring a move operator in a class:

The move operator has more sequence of actions than the copy constructor, namely:

For more details on the implementation of the move operator, see the example below.

6. An example of implementation of the Vector class (dynamic array). Basic set of methods. The move constructor and the move operator in the class

The example demonstrates the declaration and use of the Vector class, which implements a dynamic array of type double*. The class uses a basic set of special class functions and methods for demonstration purposes. These functions ensure the correct functioning of class instances (memory allocation, deallocation, exception handling, etc.). Optionally, you can reprogram this class to a one-dimensional array for the generic type T.

You can also extend the class by adding new methods that operate on an array. For example, you can add methods for reversing an array, concatenating, accessing array elements by index, etc.

Develop a class that is a dynamic array. In the class, form a minimum set of special functions for organizing work with an array.

6.2.1. The components of the Vector class

The class contains the following components:

The above list is the basic (minimum) set of functions to ensure the correct functioning of the class. Optionally, this set can be expanded with additional functions.

A dynamic array of elements of type double is declared with double*. The number of elements in the array is count. After entering these variables, the class looks like this

In our case, it is agreed that the check for the presence of an empty array is carried out based on the value of count. If count> 0, then the array is not empty. In all other cases, the array is considered empty. The control over the filling of the array lies entirely with the count variable.

In different methods of the class, the program code will be repeated. The basic operations commonly used on an array are:

Therefore, it is advisable to implement the corresponding internal private-functions Free() and CopyArray() in the class. After entering the functions, the program code of the class is as follows:

The Free() function frees the memory allocated for the array A. This function will be called from other functions in cases when it is necessary to reallocate memory or free memory.

In the Free() function, the fact of the presence of parts in the array is checked by the count variable (count==0). Therefore, in the case of an empty array, you do not need to assign nullptr to the pointer A every time.

When designing classes, a different number of constructors can be used to initialize internal data. The first is the constructor that initializes the array to cover the largest number of internal fields of the class. In our case, the following constructor with two parameters is introduced into the public section:

After declaring a parameterized constructor, a destructor must be declared that calls the internal function Free().

This is the only time the program uses nullptr to assign a value to pointer A. In all other cases, you do not need to set pointer A to nullptr, since control over the presence of an empty array is entirely in the variable count.

Since our class uses dynamic memory allocation for internal data, it is imperative to use the copy constructor to avoid the disadvantages of bitwise copying. More details about this are described here and here.

In our case, the copy constructor code is extremely simple. The CopyArray() function is called to do all the necessary work.

The copy operator must be implemented in cases where the class uses dynamic memory allocation. In our case, the copy operator code contains a call to the CopyArray() function.

In the move constructor, the most important line is

This action is required, because when assigning pointers

we get a situation that both pointers (A and obj.A) point to the same memory area. In the case of freeing memory for pointers, the same memory area will be freed twice, and this will result in an exception being thrown. To avoid this, the number of elements in the temporary object obj.count is set to 0. When calling the function Free(), which frees memory, count is checked for a nonzero value; if count == 0, then the memory is not freed, and, therefore, unnecessary (unnecessary) memory will not be freed.

Since our class has a dynamic array that can have an arbitrary number of elements, it is recommended to declare a move operator in it.

For demonstration purposes, the class implements the Set() method, which makes a copy of the external array, which is an input parameter, into the internal array.

since two arrays (external and internal) will point to the same memory location, which in some situations can lead to subtle errors.

6.2.12. Method Print(string). Display an array with the given message

To get the current state of the class, the Print() method is introduced.

6.2.13. General structure of the Vector class

After completing clauses 4.2.2 – 4.2.13, the Vector class in its abbreviated form will be as follows.

To demonstrate how to call the move constructor and the move operator outside the Vector class, the GetV() function is introduced, which forms an arbitrary array and returns an instance of the Vector type.

The test of the Vector class is done in the main() function.

6.2.16. General structure of the program

In the most general case, the program structure has the form

After combining all the above code snippets, running the program will produce the following result