The concept of an algorithm. Ways to write algorithms. Classification of algorithms by structure. Algorithm Properties

1. What is an algorithm? The definition of the algorithm. Examples of algorithms

Every day a person sets himself different tasks, which he then solves. Some decisions are formed spontaneously, some follow a previously developed plan. In any case, a person seeks to achieve the desired result. In programming, to solve any problem, you first need to develop an algorithm.

Algorithm – an accurate and understandable instruction to the executer to make a sequence of actions aimed at achieving a specified goal or solving a task. A number of requirements are presented to the algorithm. The algorithm should be designed so that its implementation necessarily leads to the desired result.

Algorithm development is a creative process. For the same problem, a different number of algorithms can be developed that solve it. And, on the contrary, for some different types of tasks a generalized algorithm for solving them can be distinguished. The correct development of the algorithm depends on the correct operation of the program. If the complexity of the problem is high, then the execution of the algorithm requires more significant labor and time resources.

An example of an algorithm. Let the student need to write a report and print it on a home printer. A generalized algorithm for performing this work may be, for example, as follows:

There are three ways to write algorithms:

3. Graphic way to write an algorithm. Designation on flowcharts

The most common way to write an algorithm is a graphical method in the form of a flowchart. A block diagram is a drawing consisting of geometric shapes (rectangles, parallelepipeds, rhombuses, ovals, etc.) that are connected by directional lines. Geometric figures (blocks) correspond to certain steps of the algorithmic process, and directional lines determine the execution order of blocks.

The geometric designations of the most common blocks are shown in Figure 1. 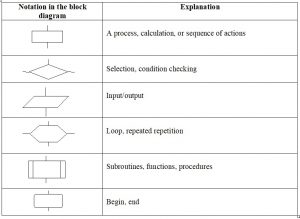 Figure 1. The geometric designations of the most common blocks that are used in flowcharts

4. Classification of algorithms by structure

The following types of algorithms are distinguished: 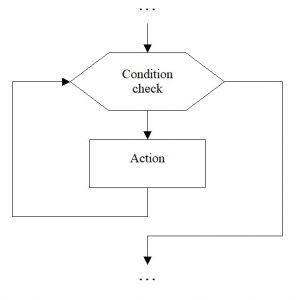 The following properties are distinguished for the algorithm: