The scopes of names in Python. Local and global names. Visibility rules for names. LEGB rule. The global keyword. Overriding names in functions

1. The meaning of names in Python

In the Python programming language, everything about the scope of name is determined based on the assignment operation. As soon as a name is encountered in the program, the interpreter processes it accordingly. This can be to create, change, or search a name in a namespace (the area where names are placed). In this case, a namespace is a place in the code where a value has been assigned to a name. This namespace defines the scope of the given name.

2. In what scopes can you assign values to variable names?

According to Python philosophy, every variable has a name and is an object. The name of a variable appears in the program after assigning a value to it. Once assigned, any name has its own scope (namespace). According to the scope of a variable, this variable can be classified in one of three possible cases:

The Python language allows you to declare functions using the def statement. Within this instruction, you can define your own names. Thus, the concept of a local name arises. A local name is a name that is created (defined) inside a function. Functions define nested namespaces that restrict access to names defined within those functions.

4. What scopes are there in Python?

There are four scopes in Python: 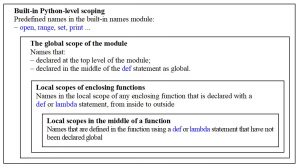 5. How are scoped names searched? How the LEGB rule works

If a name is declared in a function (local scope), then the interpreter looks for this name in the following order:

If there is a reference to a name in the global scope, then the search occurs in this scope and also in the built-in scope (see Figure 1).

6. How do I determine built-in scope names? Example

The built-in scope names are placed in the standard library module builtins. To get a list of names, you need to import this module. The list of names is obtained using the dir function.

After starting the program for execution, a list of built-in names will be displayed.

If the program includes the builtins module as follows

then using the name builtins. you can refer to built-in names. For example

7. What are the relationships between local and global scopes?

The following relationships exist between local and global scopes:

8. How do you override built-in and global names inside a function? Example

According to the LEGB rule, built-in and global names can be overridden within a function.

After running the program produces the following result

As you can see from the result, the built-in and local name are overridden by local names within the function.

9. Declaring a global name inside a function. The global keyword. Example

A global name within a function can be declared using the global keyword. In general, such a declaration looks like this: