Before studying this topic, it is recommended that you familiarize yourself with the following topic:

To provide interaction between threads of execution in the Object class, 3 methods are implemented.

According to the Java documentation, the general most common implementation of the method is as follows:

In Java, the wait() method has other overloaded implementations that allow you to wait for a specified period of time.

2. The notify() method – resumes execution of the thread from which the wait() method was called for the same object.

According to the Java documentation, the general form of the method is as follows:

3. The notifyAll() method – resumes execution of all threads from which the wait() method was called on the same object. Control is transferred to one of these streams.

The general form of the method is as follows:

2. Scheme (figure) of the interaction between two parallel threads

The process of synchronized communication between threads can be repeated as many times as necessary. 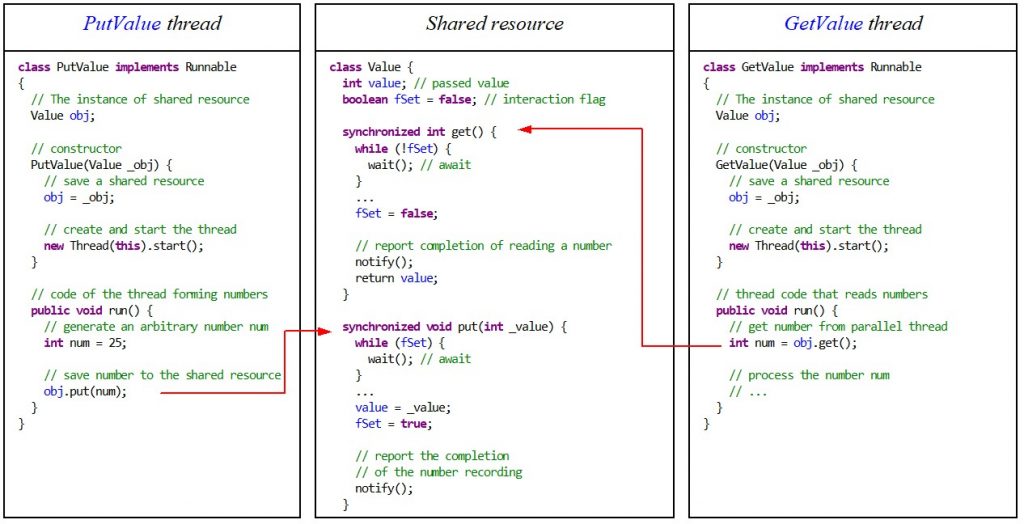 3. Implementation of a polling system between threads. An example of exchanging values between two threads that run in parallel

Solution. To solve this problem, you need to form 3 classes:

4. An example of sequential synchronized use of a shared array of numbers between threads. Implementation of the polling system

The solution of this example can be used as a template for implementing the interaction between the threads themselves.

Demonstrate the interaction of threads of execution a specified number of times.

Solution. To solve the task, you need to implement 3 classes:

Both classes FormArray and GetArray implement the Runnable interface. Classes encapsulate threads of execution. The following constituent elements are implemented in the classes: