1. The concept of unit testing in Java

In Java programming systems, including Java Eclipse, testing tools have been introduced that provide for the creation and use of automated tests for the developed programs. Correctly constructed testing allows you to reduce the number of errors in the program to zero.

The TDD (Test Driven Development) methodology is popular in the development of modern software systems. The main idea of using TDD is that first tests are developed for the desired behavior of a program (system), and then a working program code is written, which is checked by the already created tests using refactoring tools. As a result, pre-prepared tests allow you to avoid putting into operation a program containing errors.

For testing, Java Eclipse uses what is called JUnit testing, which is the de facto standard for testing Java applications. JUnit is a common framework for writing tests as Java classes. These classes can be run as a unit using the test runner.

JUnit has many extensions that are implemented in all modern Java development environments. Today JUnit is used in such directions as:

JUnit testing is used by many quality assurance teams on purpose-built websites that automate the application of end-to-end functional tests. In Java Eclipse, using the JUnit engine does not require a running application server or a live database.

This means that a JUnit test is a specially designed class containing methods that test the code of other classes. In Java Eclipse, this class is created using the JUnit Test Case command (see examples below).

The class contains a number of methods. Each of the methods of the testing class is treated as a separate test case – Test Case.

Test cases (methods) of a JUnit class can be declared using the following annotations (Java version Eclipse 2018-09 is considered):

An arbitrary number of methods are allowed with all of the above annotations.

In the most general case, an example of a class generated by the Java Eclipse system might look like this

In the testMethod() method, you need to insert your own code for the methods of another class (see examples below). After that, you can run the test using a dedicated Java Eclipse command.

3. An example demonstrating the use of JUnit to validate a quadratic equation solution. Step-by-step instruction

Using JUnit technology, develop a Unit test to test the operation of the SquareEquation class, which contains tools for solving a quadratic equation. The test should be located in the SquareEquationTest class and contain appropriate methods to validate the resulting solution.

Quadratic roots are returned as an instance of the Roots class. Class SquareEquationTest comprises appropriate means solve the quadratic equation.

3.2.1. Creating the SquareEquation and Roots classes

Classes have the following purpose:

The SquareEquation class has the following components:

After creating the classes, you can proceed to creating a Unit-test.

To create a Unit test in Java Eclipse, you need to select a sequence of commands

as shown in Figure 2.

As a result, the “New JUnit Test Case” window will open (Figure 3) in which you need to specify the necessary information about the test.

When creating a window, the system will automatically fill in some fields. The window displays the following information.

For our test, it is enough to activate only one setUp() field. This will add an @BeforeEach annotation method that will be called before the test. This method will instantiate the SquareEquation class (see codes below).

In our case, you can leave everything unchanged.

After selecting the “Next >” button, the following window “New JUnit Test Case” will open in which you need to specify a list of methods that will be tested. The window view is shown in Figure 4. Selected methods will be declared with @Test annotation. These are directly test cases. All other options in the window can be left as default and go further with the Finish button.

Figure 4. The choice of methods to be tested. The Solution() method is selected

After creating the JUnit test using the Java window interface, Eclipse generates the code for the SquareEquationTest class

In this code, two methods are generated:

Then, in the setUp() method, an instance of the SquareEquation class is instantiated

After that, in the TestSolution() method, the code for checking the correctness of the obtained solution for the given coefficients is entered

in the se instance

The solution is verified using the overloaded assertEquals() method of the org.junit.jupiter.api.Assertions class. The solution in the variables rt.x1 and rt.x2 is compared with the previously calculated (manually) solution of the current variant (a = 2, b = 1, c = -3) of the quadratic equation. If there is a match, then the decision is correct. The system needs to tell the system that the decision is correct after starting the test (next point).

In general, the text of the entire testing unit is as follows

After the code for the SquareEquationTest class is generated, the developed test can be run for execution. This is done by the commands

or by calling the sequence of key combinations Alt + Shift + X, T as shown in Figure 5. 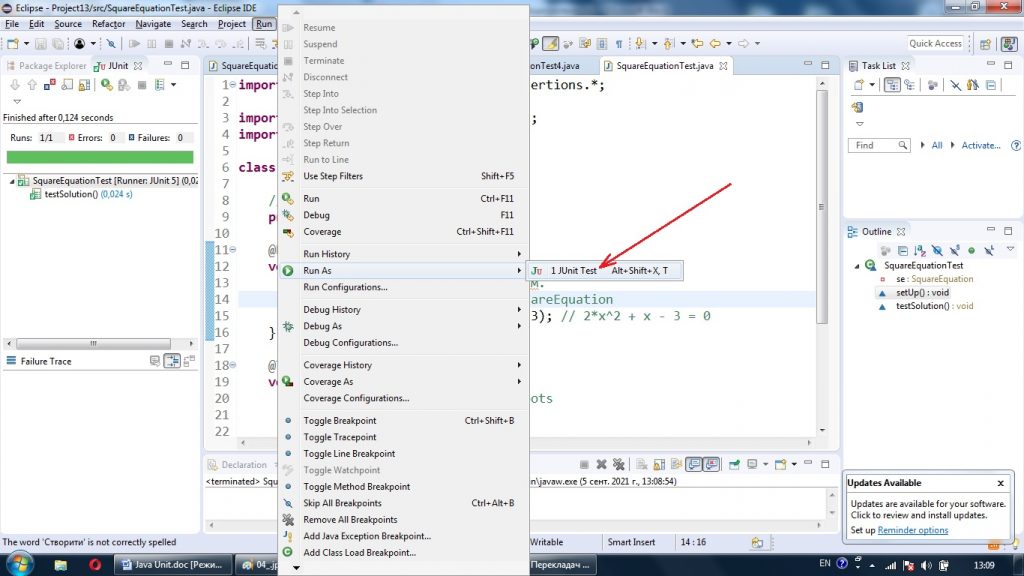 There is another way using the quick menu command (Figure 6). 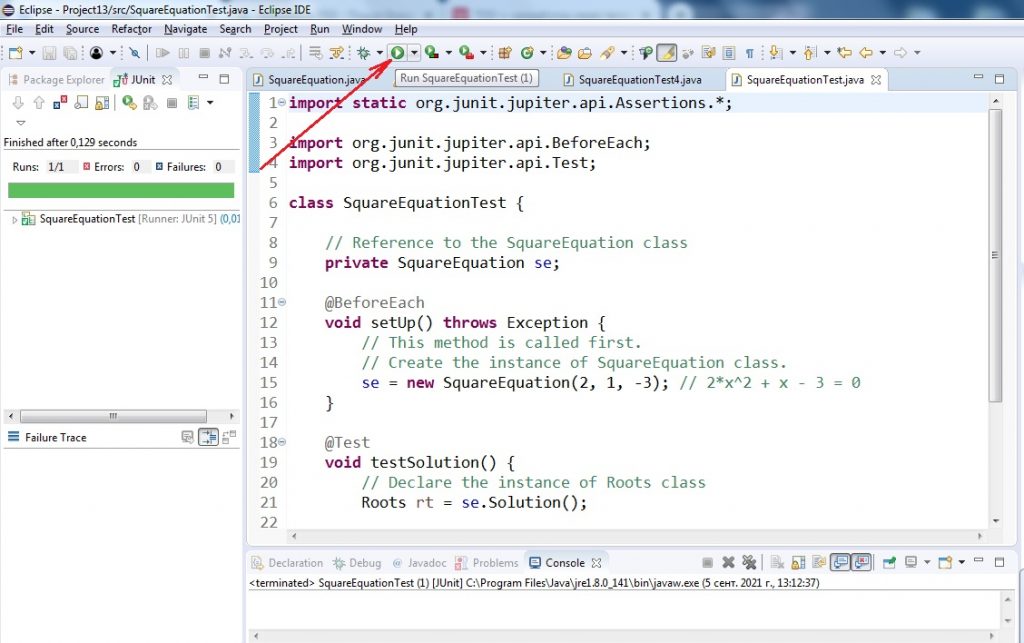 After starting Java Eclipse, the test result will be displayed in the JUnit window on the left side (Figure 7). 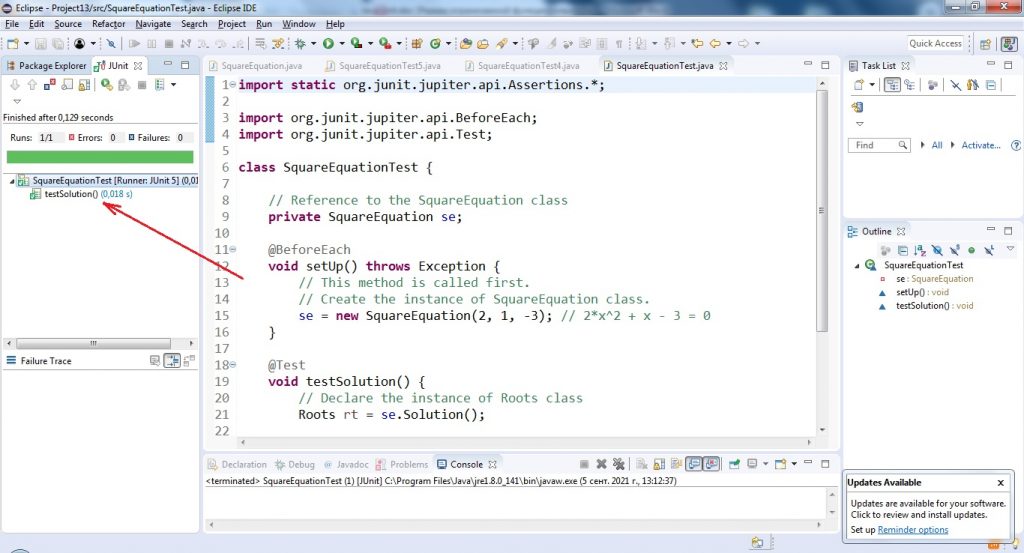 As you can see from the result, the confirmation of the correct decision was received, that is, the test was passed. This means that the Solution() method of the SquareEquation class gives the correct result for the case when a = 2, b = 1, c = -3. If in the TestSolution() method, when calling assertEquals(), you specifically specify an incorrect answer, for example

then after re-running the test, an error will be displayed in the JUnit window, as you can see in Figure 8. Although this is not a program error, but a deliberate error in the test.

4. An example showing the sequence of method calls in a JUnit test

Let a Java Eclipse system create a class named TestClass to test some other class. In this example, the essence of the class under test is irrelevant.

The program code of the class is as follows

After running the test for execution, the program will give the following result

After analyzing this result, you can conclude that the methods in the test class are called in the order defined by their annotations. The @BeforeAll annotation methods are called first.

All methods with @AfterAll annotation are called last.