Each project in the Java language uses so-called packages in its work. A package is a separate module (namespace), to which corresponds the directory of the same name (folder). The package contains libraries (groups) of classes. These classes are combined in the same namespace or package. The number of classes implemented in the package is unlimited. The classes that are declared in the package are implemented in files with the extension *.java.

Packages can have a variety of levels of attachment (subdirectories, subfolders). At different levels of the package nesting, the names can be repeated.

2. How to connect a package to an existing project in Java Eclipse? The structure of the project that contains the packages

In the Java Eclipse system, the package connection is a standard command. A project must be created in advance. The project can contain an arbitrary number of packages. Each package can have an variuous number of classes.

To create a package in a certain project, use the command

As a result, the window shown in Figure 1 opens. The window displays the name of the project and the package that will be placed in this project. 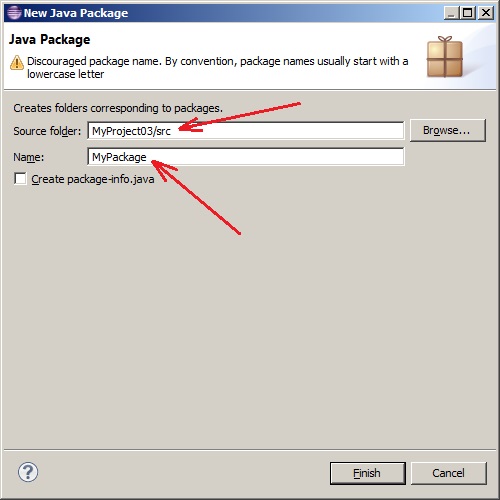 After selecting the Finish button, the following occurs. A special folder (directory) with the same name corresponds to the project named MyProject03. Several subdirectories (subfolders) are created in this directory. One of them is a subdirectory called src. In this subdirectory, the MyPackage directory is created, corresponding to the created package.

3. What is the general form of calling a class from a package? Example

To access the class name from the package, use the following general form:

If the PackageName1 package contains a subfolder (subpackage) named PackageName2, then access to the class named ClassName looks like this:

Similarly, access to the class is formed in the case of more complex nesting levels.

For example. Suppose we have a package named Figures. In the package, two classes with the names Circle and Rectangle are implemented. Then, the code fragment that creates the objects of these classes will be as follows:

4. An example that demonstrates the use of one class name in different packages and in different directories (folders)

Figure 2 shows the hierarchy that packages can form. 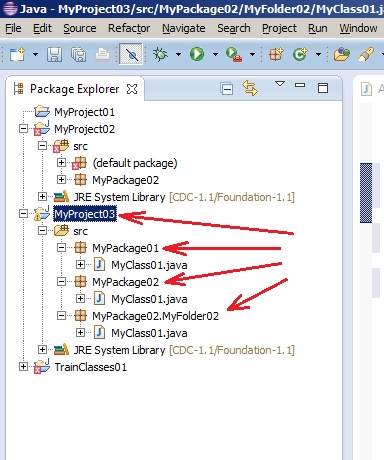 Below is the demo code that creates the MyClass01 class objects, which are located in different packages (folders), according to the diagram in Figure 2.

As you can be seen from the program code, the class is accessed from the package using the separator ‘ . ‘ (dot). In order to reduce very large lines of access to the class name, the import directive is used.

5. What is the purpose of the import directive? General form. An example

The import directive allows you to shorten very long rows of accesses to classes (interfaces, enumerations) that are implemented in packages.

In the simplest case, the general form of the ‘import’ directive is as follows:

For example. Let the package Figures be specified in some project. In the Figures package, one class with the name Circle is implemented. The class is placed in the file “Circle.java”. The source code for the Circle.java file that implements the Circle class is:

If you want to access the methods of the Circle.java file from the Figures package from any other class that is located in another package of this project, you must first indicate:

The following is an example of connecting and using the Circle class from another package and another class.

In the above code, a Circle object with the name c is created. However, with the help of the ‘import’ directive, the class name is indicated in a convenient (abbreviated) form:

If you remove the line in the OtherPackage package

6. How in the import directive specify that all classes from this package can be used?

There are cases when several classes are implemented in the package (files with *.java extensions) and there is a need to connect the whole set of classes. In this case, the general form of the ‘import’ directive can be:

The ‘package’ keyword specifies the name of the library, which can include a different number of compiled modules. Compiled modules are files with the .java extension.

If the module (file with the .java extension) specifies a string like

then this means that this module is part of the library named PackageName.

8. What is a compiled module in Java?

Each compiled module is a file that contains the source code in the Java language. This file has the extension “*.java”. The file name is the same as the name of the public class that is implemented in this module. This requirement is mandatory.

9. What are the requirements for the implementation of the compiled module (.java)?

The following requirements are imposed on the implementation of the compiled module:

10. How many classes can be implemented in the compiled module?

11. What is the purpose of .class files?

After that, the files with the extension .class are combined into a package and compressed by the JAR utility. This is all done by the Java interpreter.

12. What are the benefits of using the ‘package’ and ‘import’ directives?

Using the package and import directives makes it convenient to divide the namespace so as to prevent conflicts between different Java class developers.

13. An example that demonstrates the structure of a project and the placement of compiled modules 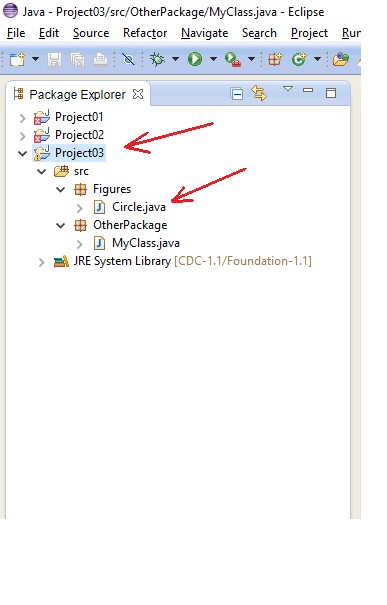 If the compiler encounters the import directive, it generates the full name, taking into account the path to the directory that is written by default on the system.

thus, the full name of the Circle.java module is obtained:

If desired, the default path to the directory (folder) can be changed.

14. An example of connecting a class from the standard Java library

To access the class name from the standard Java library, use one of two methods:

In the above code, the Vector class is referenced by the full name: