1. What are the reasons for the need to properly control access to the contents of libraries in the Java language? Why do You need to use access control correctly?

Proper control of access to the program code means hiding code that can not be used by client programmers, and conversely, the general availability of code that can be used by third-party developers.

In this case, the important is the ability to allocate a variable (changeable) component of the program code from a constant component. Hiding implementation is the basic idea (the main meaning) of access control.

2. What are the levels of access to the classes placed in the packages?

There are two levels of access to a class that is part of a package:

Manipulating these levels of access, the programmer “hides” or provides in common use the developed program code for its further use by other developers.

At a packet access level, the class member is available to other classes of the current package. For classes that are implemented in other packages, this class member is considered to be hidden or private.

4. An example that demonstrates a package-level access for two classes

The example declares a project named DemoPackages. The project creates two packages with the names PackageA, PackageB. The PackageA package implements a library of two classes that have the names ClassA1 (located in the ClassA1.java module) and ClassA2 (located in the ClassA2.java module). The initial structure of the project is shown in Figure 1. 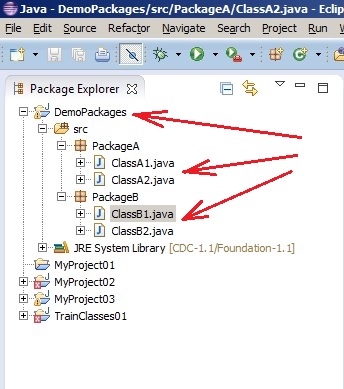 Below are the program codes for the modules (files) ClassA1.java, ClassA2.java, ClassB1.java, ClassB2.java that correspond to ClassA1, ClassA2, ClassB1, ClassB2.

The text of the module ClassA1.java. The class correctly creates an object of class ClassA2. This is logical, because ClassA1 and ClassA2 are declared in one package and have access within the package boundaries.

However, trying to create a ClassB1 class object from another package will cause a compilation error.

The text of the module ClassA2.java. The class correctly creates an object of class ClassA1, because classes are declared in the same package. And of course, it will not work for ClassB1 by abbreviated name, because this class is implemented in another package (PackageB).

The text of the module ClassB1.java. In the module, a ClassB2 class object is correctly created, because the ClassB1 and ClassB2 classes are in the same PackageB package, which is accessed by default. An attempt to create a ClassA1 class object is failed, because the ClassA1 class is declared in another package and there is no public access modifier for it.

The text of the module ClassB2.java. The class correctly initializes a ClassB1 class variable because ClassB1 and ClassB2 are in the same package.

5. What are the advantages of using access within the package (by default)?

6. What does ‘public’ access type mean for a class implemented in a package?

The class in the package can be publicly available for use in other external libraries. In this case, before the class declaration, the access modifier ‘public’ is specified:

After such an declaration, you can refer to a class in a package from another package by calling:

where PackageName – The name of the package in which the public class named PackageName is implemented.

In a package, no more than one ‘public’ class can be declared.

7. An example that demonstrates the use of the public modifier for a class in a package

Let two packages with the names PackageA and PackageB are created in the project named DemoAccess. PackageA implements the ClassA class, which is of package access type (without access modifier). The PackageB package implements the class ClassB, which is declared with the modifier ‘public’.

The structure of the DemoAccess project is shown in Figure 2. 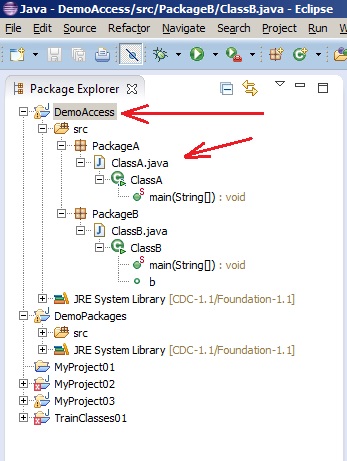 Figure 2. The structure of the DemoAccess project

The ClassA class text from the PackageA package is the following.

As you can see from the above code, you can easily access the PackageB.ClassB class, since this class is declared with the public access modifier.

The text of the ClassB.java module, in which the ClassB class is implemented

As you can see from the above code, you will not be able to access the class PackageA.ClassA, since this class is declared as a batch (without access modifier).

It is important. In order to access the internal variable b of ClassB from ClassA, this variable must be declared with a public access modifier.

8. Is it possible to add a private access modifier in the class name declaration?

No it isn’t. The Java language does not support the use of the private access modifier before the class name. That is, the following code is erroneous.

This is logical, since to hide a class in a package, a packet-level access level is sufficient, which is declared without any modifier

9. Is it possible to add a protected access modifier in the class name declaration?