The idea of inheritance in programming is taken from nature and dates back to the 60s of the 20th century. C++ greatly enhances the concept of classes by introducing inheritance into classes. In nature, inheritance allows you to add new skills to parental qualities. In programming, inheritance is the property of a class to receive the program code (skills) of another (base) class, adding its own code to it, thereby expanding its capabilities.

Using the inheritance mechanism, you can change any class developed by the programmer himself or by other programmers without restrictions. In this case, you should not rebuild the structure of this class. New features are added to the base class. The capabilities of a base class in an inherited class can be extended, modified, narrowed, destroyed, or left unchanged.

Inheritance is only for classes and their characteristics, not for variables or functions.

Projects in the C++ language are based on the use of specific classes that solve assigned tasks. Through the use of inheritance, classes are built incrementally, from basic simple classes to specialized classes that progressively refine the solution. As a result, classes form a hierarchy. In these hierarchies, the top-level classes (base classes) describe some characteristics that are common to all, which, at lower levels, are detailed in the inherited classes. A completed software project is a workable system consisting of hierarchically interconnected classes. The number of classes in some projects can be tens or hundreds.

Deriving code from a base class is an efficient way to use already written code for your own needs. Inheritance is one part of code reuse.

2. The syntax for declaring classes that form a hierarchy. Base class and derived (inherited) class

To implement inheritance, at least two classes are required. If in a program a class named B is to be inherited from a class named A, then the class declaration looks like this:

In the above declaration, class B inherits some or all of the characteristics of class A. From class B, another (third) class can be inherited, which will receive some or all of the characteristics of classes A and B. In addition, one or more classes can be inherited from class A, which, in relation to class B, form a parallel branch of the hierarchy. Figure 1 shows one of the possible options for the formation of a tree-like inheritance hierarchy by classes. 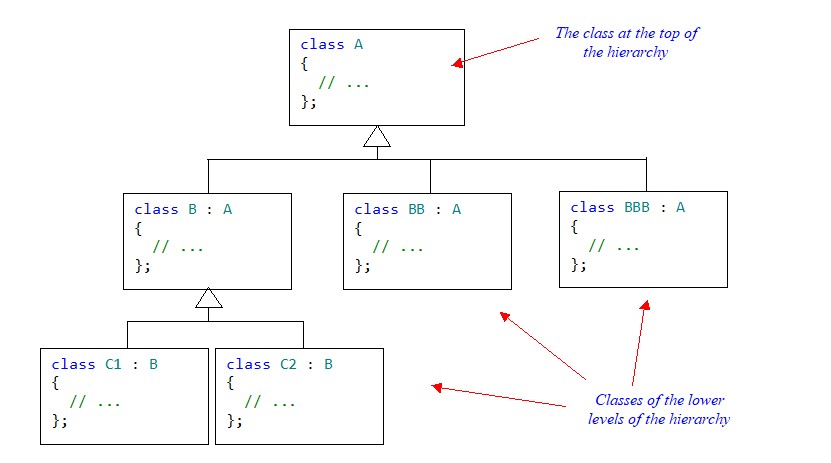 An important question in inheritance is: how to transfer the characteristics of the base class to the inherited class? Here C++ gives a wide range of possible implementations.

Encapsulation is used to specify which members of a base class should be available in an inherited class. The basis of this mechanism is the use of the keywords private, protected, public to grant access or deny access to the elements of the base class.

3.1. The interaction of two classes. Access from an inherited class to elements of the base class

A base class element (variable, function) can be declared with one of three access modifiers:

Figure 2 shows all 3 types of access for two classes that form an inheritance hierarchy. Demonstrates access to the variable a of the base class A from the Func() function of the inherited class B. The same rules apply not only for variables, but also for functions of the base class A. 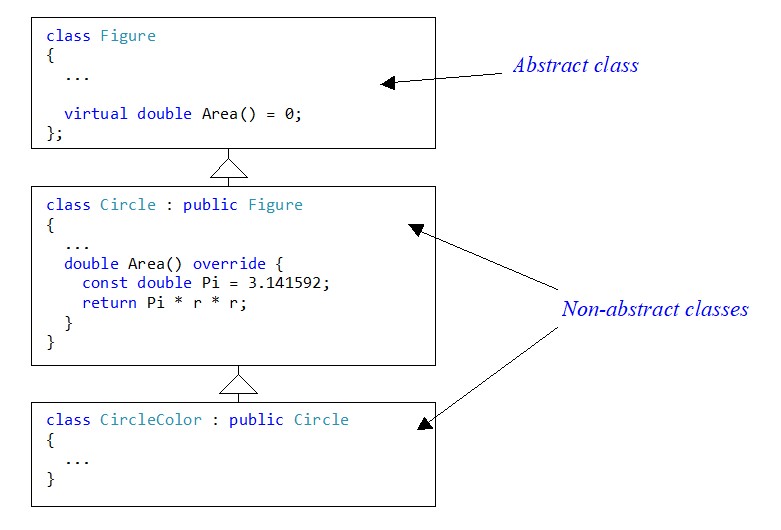 3.2. The interaction of two classes. Access from an instance (object) of an inherited class to elements of the base class using the private and protected access modifiers

3.3. The interaction of two classes. Accessing members of a base class from a derived class. The public access modifier

If in the base class A a certain element is declared with the public access modifier, then an instance of the inherited class B:

Figure 4 clearly shows all possible options for such access.

4. Inheritance of 3 or more classes. Access from inherited classes

As shown above, a base class can be inherited by prefixing its name with the modifiers private, protected, public. The difference in the use of these modifiers is in the class that is derived from the inherited class. That is, if three classes are given with the names A, B, C, successively inheriting each other, then the effect of modifiers will be exactly on class C.

4.1. Accessing the private base class from derived classes 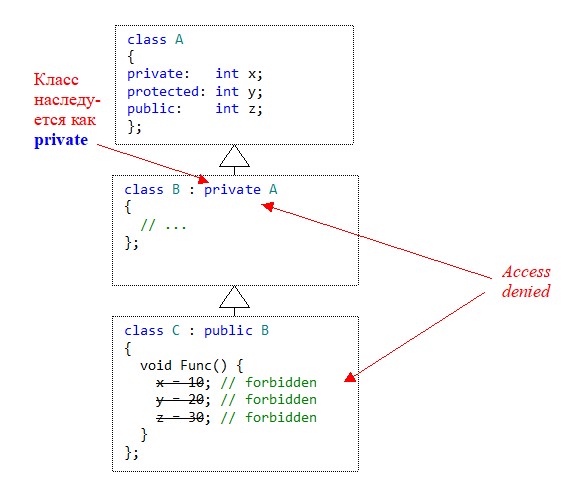 Figure 5. Access to members of private class A from inherited class C is denied

4.2. Accessing protected- and public- base class from derived classes

If the base class A is inherited with the protected or public modifiers, then the elements of this class are available in the inherited classes B and C.